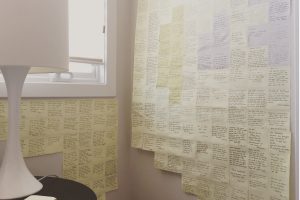 People often ask me how I have made it through the last six years.

Without the presence of God we would not still be here.

There was a time in 2013 where I was at the end of my end. I was exhausted and in dark emotional despair. It is the worst feeling in the world to watch your child suffer constantly in pain and not be able to do anything about it. I was trying my hardest 24/7, but nothing made a difference.

I was 15 pounds underweight. My hair was falling out. All I could do was put on black or grey clothes. It felt way too celebratory to even put on a small pair of earrings.

In our medical situation with our son we were receiving blow after devastating blow of disappointment that felt like unrelenting kicks in the gut. I couldn’t breathe.

Spiritually, I was convinced God had abandoned me. I pretty much told Him that He was cruel, and I didn’t think I could believe in a God like Him anymore. You know what? He didn’t run away or condemn. Instead, He said, “Finally. Transparency. I’ve been waiting for this. I can work with this.“

Pain forces you to face whatever you believe about God. We may have to come to the place in a situation where God seems cruel before we are willing to really face our true beliefs. Then we begin a process of hard struggle to decide what is really true. This is not an intellectual process … it’s a heart process.

It took years, but I came out on the other side, knowing and believing in God and His goodness. My life is a 180 degree turnaround. I feel completely unrecognizable to myself now.

That being said, two things helped me in the process:

I have a thing for sticky notes. As I was seeing the Bible in a new light and my faith was being restored, it became part of my personal fight to write verses on sticky notes and look at them. I started taping them together so that I could look at them all at once. After a while, the taped-together grid was too big to fit on my end table anymore.

Every verse I wrote on the square yellow notes was important to me, God was breathing on every one. Over a three-year period, I acquired several hundred taped-together sticky notes that climbed up my bedroom wall, becoming a permanent wallpaper feature.

I went through a phase where I needed bigger paper, colors and markers, so I wrote verses down that way for a while. I taped them on the underside of Carson’s bunk for about six months so that he would read them while he was in bed. This was how we fought. 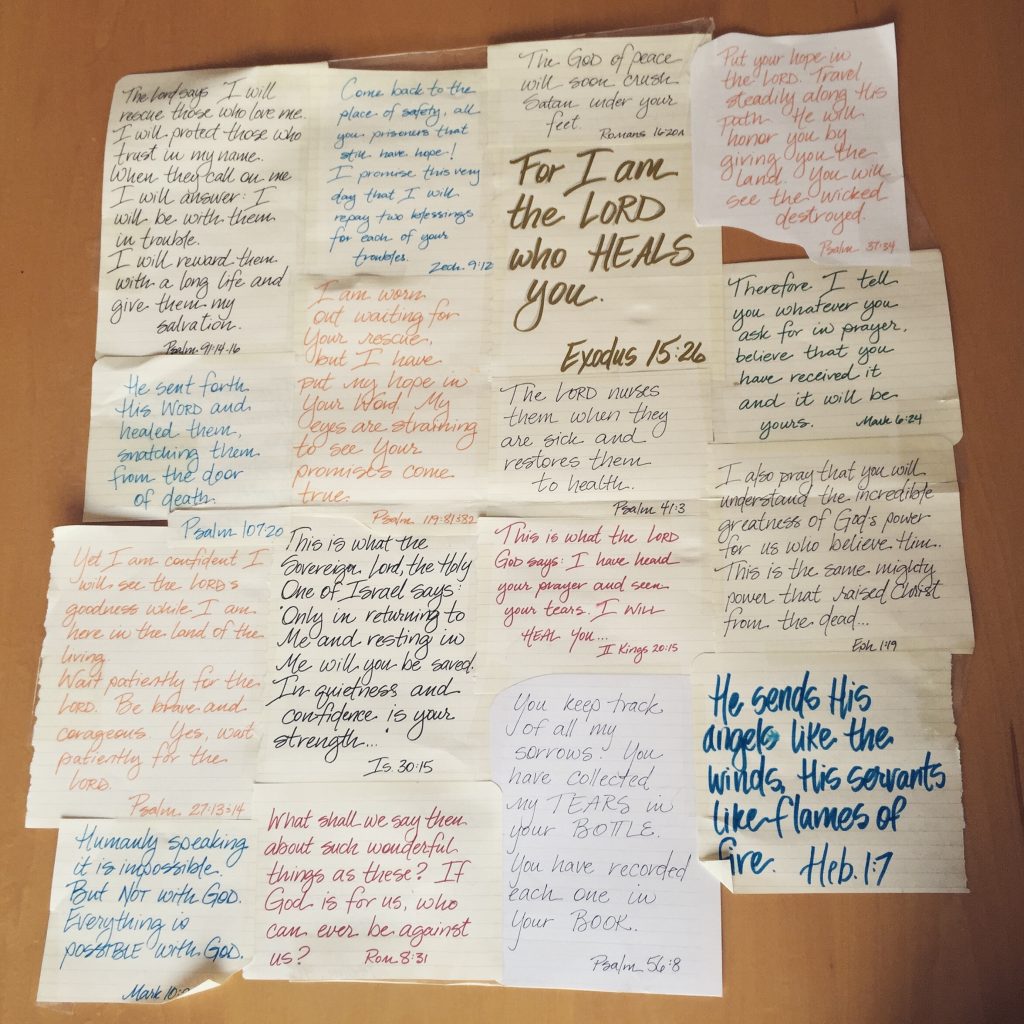 When we are in eternity someday, we will not have the opportunity to make this choice. There will be no pain, so no need to choose Him over the darkness. When we make these hard choices in the middle of the pain, we are giving him an offering that we can only give Him while we are here. We have this choice while on the earth to give Him a costly sacrifice. It’s a moment in time that will never happen again.

Make thankfulness your sacrifice to God, and keep the vows you made to the Most High. Then call on Me when you are in trouble, and I will rescue you…

When is thankfulness a sacrifice? When it hurts. It reminds me of the attitude that David had (2 Samuel 24:24) when he refused “to offer God a sacrifice that cost him nothing.”

It is only in the middle of excruciating pain that we are able to demonstrate full trust. In the moment when everything is screaming at you to GIVE UP, you can choose to defy natural logic and do the thing that is the most difficult to do. Let your pain be the fuel to your fight. It honors Him and gives the cold-shoulder brush-off to the enemy at the same time.

These are the moments that are recorded in heaven.

I see you and the HOLY SPIRIT writing a book to minister to people.
I might be wrong? By I’m just saying…
Love the sellers

Let us know when Carson is healed! I’m praying and declaring abundant life and divine health to every cell of his body! 🙂

Oh yes it will give me great joy. Thank you!

Bryn, I am just now seeing your blog because Trisha shared it on FB. I know your words will touch many. When you decide to write a book, please reach out to me! You never know how God will connect you to the right people at the right time. Continuing to pray for a miracle…

Wow! I love this Bryn. The message is so powerful. I cannot pretend to comprehend even a small portion of your pain, or of your sacrifice of praise, but I am so glad you wrote this because it shares a powerful message. … btw: your handwriting is beautiful! 🙂

I say this to you often Bryn …your children our so special. They are strong, respectful, loving, supportive, insightful, beautiful people. Their kindness and understanding are like bricks that help support the wall of strength that holds your family together. You and Jeff have led them to God and he is proud of who they are. In the darkest days, Carson praises him. He extends prayers to others while profusely suffering himself. It is an honor to feel the presence of God when being near you. We, in prayer together, will win this battle.

Denise – tears! We love you.

So difficult to open your heart and soul for everyone else to see and judge, a healing process, first for yourself, then your family, then for any and all who want to observe, care, participate….love that you are able to express these deep feelings…hope that you continue the blog……….Love you, Aunt Jane

Well said Bryn. I know when I was struggling physically last summer with lots of blood work and other tests before I got any answers in Oct. there was a song by Natalie Grant “King of the World” that brought me back to where I needed to be, that God’s ways and plans are different then ours and leaning on and trusting Him was were I needed to be and I know you as a family have lived that. God is truly going to use you and your family in many people’s lives. Thanks for sharing your heart!