The Hardest Thing to Do 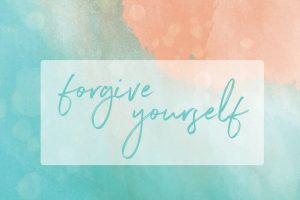 It’s been six years since our son’s health began to decline. (For more about our son’s difficult battle, click here to read Our Story.) Through all we’ve endured, God has been working a process in me. Showing me how to discard fear, build faith, handle constant grief and hold on to hope. All these things occurred naturally as I developed a deeper relationship with Him. These types of growth points happen as a byproduct of relationship. He gently reveals areas that are causing problems and helps you face them, deal with them and move on. It’s a kind of constant tearing down of old mindsets, rebuilding new better ones. It can be painful, but it’s a journey you stay on because you start to recognize the benefits of increasing emotional and spiritual freedom.

Nothing in my journey was quite so hard as coming to the point where I could forgive myself. When a child, whether young or grown, is sick or dies or makes continual detrimental choices, we often place the blame on ourselves as parents. In my case it was also something the enemy used to keep me completely chained, choking in guilt. I should have seen this coming, I could have done something to prevent it, I should have been able to protect him, this was my fault…. and on my inner dialogue went. For some reason we have the ability to believe that God can forgive us, and can even come to the point where we forgive others, but this one thing we don’t easily do.

The first time I ever took Carson to a healing service at a church, I was eager to get him up to the front to be prayed for. The atmosphere in the church was electric, they had seen many conditions resolved in response to prayer and people gave amazing testimonies of relief from pain. As we stood in front of two college-age young men, they listened as I described a brief summary of our story with tears coming down. I told them about Carson’s violent decline, his inability to eat and his long term confinement to bed. I expected them to pray a fiery prayer that would hopefully reach the heart of God and make a difference in his condition.

Instead, there was a long pause, as one of them stared at me and then spoke with hesitation.

“God wants you to know that this was not your fault.”

What? Why is he talking about me? This was not what I wanted to hear. Not what I was ready to hear, not what we came up here for. I stared at him with even more tears coming down. All I wanted to him to do was help my son. Eventually, seeing my distress, they did pray for him.

I left there bewildered. I didn’t realize until years later that God intended on that day to start the healing process in me, not Carson. I would like to tell you that once this issue was revealed to me, I immediately recognized it and dealt with it and it was over.

Nope. It took me six months to come to the point, after He gently pointed it out over and over again, where once and for all I could truly forgive myself. That 20 year-old guy in the prayer line was listening intently to God and told me what He was saying at that moment, even though it wasn’t anywhere on my own mental radar.

God wants us free from all chains. He is interested in us being free and healthy in every area, body, soul, and spirit. He was tortured and gave his life for this very thing. If we cannot come to the point of forgiving ourselves, we are saying to Him that his sacrifice was for nothing. That although He can forgive us, our own accusations against ourselves are too powerful to forgive.

The day I finally sobbed it out and made the permanent decision that I would no longer accuse myself for all that had happened was the day my life started to change. A heavy burden came off, one that I was never meant to carry.

If you are reading this, particularly if you are a parent in anguish over a child for any reason, please spend some time with Him in prayer and ask Him to reveal the truth to you. It is very close to my heart that mothers and fathers would find freedom from the chains of guilt. And if you don’t have children, often there are plenty of other life circumstances that we need to forgive ourselves about.

The profound effects of forgiving yourself can be drastic. After you become free, be aware when the accusing voices come. Cast them down and don’t let them regain residence in you or they will eat you alive.

Take responsibility for what you should, and let yourself off the hook for the accusations against yourself you shouldn’t be making. Then live with an awareness that the results are up to Him.

Amen… God bless your heart. Nothing easy in this… Life. Your path is surely very difficult. I pray every day for Carson and your entire family. I doubt a little over 3 minute video would help you over your struggle today… But, maybe it will be a tiny respite. I just made this video today… https://youtu.be/eslc-bJlFm0

God is defintely using you, sweet sister! You are going to touch, encouraging, challenge, and inspire many with your blog. God bless you with your willingness to candidly share your heart with others.

Bryn, your pain is being used for His glory. You will be a lighthouse for Him to the broken and wounded.

Love you, Bryn… I am learning the same lesson! Thank you for your honesty and I love your heart! Praying for Carson NOW!

Your blog truly touched my heart! Thank you for your willingness to be transparent! God is using you to be a blessing and encouragement to many! I think and pray for you all often and will continue!

What an amazing post, Bryn, and one that will touch many hearts!! I know as parents we seem to do the “woulda, shoulda, coulda” and take that blame to carry. It’s NOT ours, but it’s so difficult when it’s your kids to see that .
Continuing to keep Carson, you, and your family in prayer. Y’all are much loved by the Chalks!! Love you❤❤

Wow, Bryn! Such a powerful message and one I really needed right now. Although our struggles are no where near what your family has been dealing with, they are struggles none the less. For months I have been trying to figure out what I’ve done to cause this turmoil. It’s not me!! God will lead our child when she accepts his guidance. In the mean time, I will keep praying and know He is working!! Thank you!!

Praying for you and for God’s healing for Carson. We care for you and your family. Your honesty will help others.

Thank you Bryn for stepping out in the faith and obedience it took to start this blog. This message speaks not only to those who are parents but even to anyone who has had something bad happen to them from their past that they felt responsible for. Forgiving ourselves is a realization of the control we don’t have —–and that only God DOES have.
This spoke to me in ways that I didn’t expect. God will reach MANY through you—this I am SURE!
Thank you Bryn for letting us into the places of your heart that God has made so beautiful. It will bring great hope and encouragement to the weary and broken ones who are looking for answers. I love you and continue to pray for you and Carson and whole family.