God’s Will for Healing (Part 2) 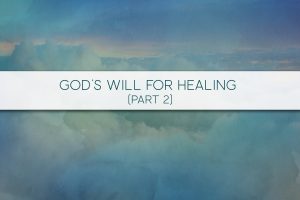 Before we get into the lies that the enemy uses to enslave people in regards to health, first remember that we are not wrestling against people, but against spiritual forces working behind people and systems, and sometimes through people. (My loose paraphrase of Ephesians 6:12)

Upfront I want to make sure that you don’t hear what I am not saying. I am not saying that we should be anti-doctor, anti-medication, anti-treatment, or anti-vaccine. I am saying that we were never intended to make decisions about our health because of man made rules, we were intended to make decisions according to God’s voice having precedence over all other voices in our lives.

Understand also that everything in the spirit realm is judged based on heart motivation, choice and agreement, not based on just what you can see happening with your physical eyes. God sees the heart, the thoughts and motivations inside of a person that nobody else can see. These are what matter to Him.

Unfortunately, our motivations and agreement are also what Satan is after. If he can convince us to believe the stupid ideas he is continuously tossing out, he can take us down a dark path. Conversely, if we refuse to be moved and stand in the truth, there is little he can do against us.

That leads us to the next lie the enemy uses to lead us to bondage:

The Truth: You do not have to settle for what has been handed to you. Physically, you might need to undergo a treatment plan, yes. But spiritually, you have the living God inside of you, and you have His Word containing all the promises we need for living and health.

I understand why those who don’t have a relationship with God can be easily taken by the strong undercurrent of other people deciding for you what should happen to your own body. As the ability to make choices gets snatched away, it’s like a slow drowning process. But those who know God are given a discernment to recognize that voice of intimidation. Please do not lay aside your authority as a child of God in favor of something inferior.

Often what is considered by a secular evaluation to be emotional difficulty or depression is the work of the satanic agenda behind the scenes. God highlighted this to me when our son Carson became suddenly and violently ill at the age of twelve. His life crashed down as he went from perfect health to deathly ill, spending months in the hospital. 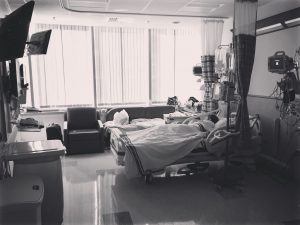 I noticed early during his first long hospital stay, that every morning when a large team of doctors came into his room, he immediately withdrew and weirdly lost his ability to speak. The doctors circled his bed, looked down on him, grilled him with questions and pushed on his painful stomach area. Carson’s inward panic escalated (perceptible only by me) and turned him into a completely different person until they walked out. After watching this happen a couple of times, I started to go over and sit on his bed with him when I saw them coming. I spoke to the doctors with him and for him, defending him from having to do it.

What I know now is that there was literally a demonic presence that walked in with the doctor group to steal his voice and intimidate him. This was not the conscious agenda of the doctors. Maybe that sounds crazy to you… unless you’ve been very ill and lost your ability to stand up for yourself, inadvertently sucked into forced cooperation with what was going on around you.

Every day when I went over and sat with him, I conversed with the doctors, yes, but I also defended him in the spirit realm from the intimidation of that scene, taking a stance against the enemy— I can’t see you with my physical eyes, but I know what you’re doing. You will not bully my son. I did this day after day after week after month, all the years we spent in the children’s hospital.

[Side note to all my friends who are parents: We are a spiritual covering for our children. The responsibility of parenting is not only to raise children physically with all that involves, but also to protect, discern and teach them what is going on in a spiritual sense. It’s easy to forget this in the taxing physicality of parenting, but it’s more important than anything we physically do.]

This was not a psychological response to long term illness that Carson was exhibiting, it was not depression because of his suffering and loss. Carson has never been depressed a day in his life, but he has been severely oppressed.

There are wonderful doctors that are still part of Carson’s care today, but they are not aware of what is going on in the spirit realm against him. Doctors are knowledgeable about tests and results, medications and treatments, they have good intentions and want to offer the best help they can. But by virtue of the system they have placed themselves under, they cannot perceive the demonic agenda against many of their patients that is attempting to steal, kill and destroy. (John 10:10)

I might have thought all that was an isolated situation until just two weeks ago when I watched the same thing happen to my other son in a different hospital. Again, it didn’t work. He learned over the course of his days at the hospital to speak for himself confidently and with authority to break the atmosphere that was trying to take away his voice.

My point is that this happens every day in hospital rooms and doctors offices in the country. Health professionals are largely unaware, but if you have endured hospitalizations or lengthy treatment plans in medical facilities, you have likely faced a strong tendency to give up your rights, to lay down your faith, to agree with hopelessness.

You need to know it is part of an entire agenda in place to intimidate. You don’t have to tolerate it.

Oh, please help us against our enemies, for all human help is useless. With God’s help we will do mighty things, for He will trample down our foes. (Psalm 60:11-12)

Dearest Brynn… all we can say …. powerful powerful Truth … oh that we all become aware of this all the time and in every situation!!may we hide this truth in our hearts … thanking you dear Brynn for letting the Holy Spirit through you bring us this precious insight ! Love ❤️