God’s Will for Healing (Part 3) 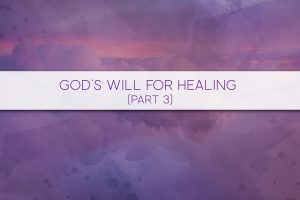 LIE #3: The infirmity that I have is from God.

In the Bible, we see in the story of Job that he thought this too. Satan afflicted Job with destruction and devastating illness, but Job, not knowing what was going on in the spirit realm, wrongly attributed his suffering to God. He thought the Lord had given him his good life and then taken it away, replacing it with suffering. He didn’t know that it was Satan who struck him. In the end it was God who restored his health and his wealth.

Ever since, the enemy works for our agreement with the idea that all physical illness originates from the opposite of where it actually does. God is blamed for the destruction that Satan perpetrates.

I first met my husband when we were eighteen. At that time he believed (because of poor teaching) that God gave him Juvenile Diabetes to develop his character, teach him lessons, or keep him from entering the Navy. I cringe thinking about mindsets we once held that are far from the truth. God does not inflict a lifetime of bondage on someone to control their life choices. How sad that this could ever be an accepted thought. Once he came into the understanding of the truth clearly presented in the Bible, he broke that agreement and repented of it, forsaking that idea completely.

If we really believe that sickness is from God to teach us something, why do we go to doctors, search the internet for solutions, go to church gatherings for prayer — anything to find relief? How do we not see the duplicity in this?

The Truth: While Satan’s agenda is to steal from us, kill us and destroy us with every means possible, Jesus gave his life freely so that we could have abundant life. When Jesus walked the earth, sickness was considered to be from the enemy. Somehow 2000 years later, the prevailing thinking is backwards, and sickness is considered to be from God.

*Side Note: There are a few specific instances in the Bible where judgement came in the form sickness or plagues. In each of these cases, plenty of warning was given beforehand, and a specific choice was made against the Lord or in complete disregard of the Lord. (Not smart.) The infirmity/plague was a direct result of extremely poor, but very clear choice. It did not happen because God is cruel, it happened because God is just. This is a subject for another day.*

Satan is the destroyer. God is the Healer, the giver of life, always good, always faithful. Satan is the antithesis of everything our glorious God is. He is constantly trying to inflict his own destructive nature on the beautiful character of God.

So then if God is all-powerful, why would He not end the suffering of so many?

He would. He wants to. Remember in the beginning (Exodus 15:26) it was His plan to have relationship with His children and meet their every need, giving them every answer for wholeness. It is still His plan and His desire to do that. Jesus reiterated this when he walked the earth, sadly commenting that many could not bring themselves to faith in Him:

This fulfills the prophecy of Isaiah that says,‘When you hear what I say you will not understand.

When you see what I do, you will not comprehend.

For the hearts of these people are hardened, and their ears cannot hear,

and they have closed their eyes— so their eyes cannot see,

and their ears cannot hear, and their hearts cannot understand,

God loves justice, and He has bound Himself by certain laws that are in place — ones that allow for the free will of man. But His desire for his creation to be healthy and whole has never changed.

I have spoken before about the specific promises that He’s given me for my family. He has told us that we will be completely healed so many times, we’d be fools not to believe Him now. A couple of weeks ago I asked Him if those same promises for healing would extend to others that I’ve been praying for with health concerns.

He replied, “It is My will that healing extends to everyone, but remember they have free will. I will not force anything on any of My children.” He is not talking about the free will of man to choose to be in relationship with him or not, that’s a given. He is speaking specifically about His children believing His word and His plan for them. God always honors the choice of man, even when the choice is made against Him.

This is why it is important to throw out the lies and embrace the truth. Every wrong belief system that does not line up with the amazing, perfect will of God as plainly spelled out in His word works against our health.

Let’s look at the next lie:

LIE #4 — Genetic tendencies of illness are inescapable and therefore impossible to change. This lie is to convince people that reoccurring conditions in family lines are inevitable, and fall outside of the realm where even God can work.

When someone enters into this agreement, that person literally invites disease by believing it is unavoidable, and by their words and expectations perpetuate disease process onto their children.

We’ve all heard this type of thing in action. “My grandfather and my father both had heart attacks at young ages, so I’m susceptible, and I’ve told my son he needs to watch out for symptoms as he gets older too….” Do you see how this works? Agreement, then fear, then agreement, then fear, agreement, fear.

I do realize that there are notable conditions that come with faulty DNA and things that go awry with genes in early development. But does that mean it’s outside of God’s ability to heal? A condition of the body can be measured against the power of the Creator? The One who knows how every single part of the human body works?

The Truth: No condition of the body should be agreed with just because previous generations endured it. Jesus’ blood was offered to break every cycle of dysfunction of the body and mind. Let there be a generation that will rise up, realize how they have been enslaved by a belief system, and break it for themselves and their future generations. You don’t have to live in fear of a disease because a family member or a doctor tells you it’s preordained for you.

This has been a very personal battle for me. My brother and twin sons have endured a nearly identical digestive disease process with different variations of severity. Over the last three years, the Holy Spirit has been a blinding flashing yellow light in my head saying, this is not genetic! Don’t believe it! It’s just a set up to make you think it is! Yet every time one of them endures another hospital stay, this is the mantra I hear spoken over and over again to my face through doctors. All of hell has come against me to believe God’s voice in this matter. Yet I know genetics have nothing to do with what is going on. Nothing I see will change my mind.

Even if something has been a repeating cycle in a family line, the agreement of it can be broken by covering it under the blood of Jesus. God’s will is not for unhealthy patterns to continue through generations, but instead for patterns to be re-established of health, wholeness and blessing.

Understand, therefore, the Lord your God is indeed God. He is the faithful God who keeps his covenant for a thousand generations and lavishes his unfailing love on those who love him and obey his commands.  (Deuteronomy 7:9)