God’s Will for Healing (Part 4) 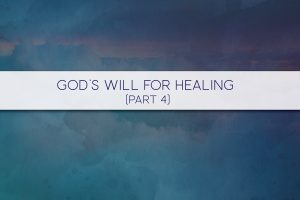 LIE #5: We are doomed to live in inferior flesh and fallen genetics; there is nothing that can be done about our physical condition because of Adam’s original sin. This is one of the saddest lies, because teaching in the church has reinforced this idea for hundreds of years to justify suffering and man’s unhealthy experience on the earth. Since we haven’t seen the Lord’s healing power consistently as was displayed through Jesus and the apostles, the church has built a doctrine around what has been seen instead of building faith around What Jesus’ blood actually paid for.

Yes, Adam’s original sin did cause suffering and ill health for man. And if that was the end of it, it’s a very sad story since no human can avoid the same fate. God would have been setting us up for failure from the very beginning of creation, knowing the first human was doomed from the start. Thankfully, God’s heart is never to set us up for failure, but to set us up for a life of thriving and success. From the very beginning of creation, He had a plan of redemption.

The Truth: He didn’t leave us on the earth with no ability to save ourselves. He sent Jesus who gave his life not only for the forgiveness of our sins, but to break the power of every tactic of oppression of the enemy, including sickness.

He was despised and rejected—a man of sorrows, acquainted with deepest grief.

We turned our backs on him and looked the other way.

He was despised, and we did not care.

Yet it was our weaknesses he carried; it was our sorrows that weighed him down.

But he was pierced for our rebellion, crushed for our sins.

Let all that I am praise the Lord; may I never forget the good things he does for me.

He forgives all my sins and heals all my diseases.

He redeems me from death and crowns me with love and tender mercies.

When Jesus won over death, all the authority Adam had previously relinquished was handed back to Him. (Matthew 28:18) He then handed the authority back to us, to move forward in freedom, conquering all enemy oppression against us. (Mark 16:17-18) It was the ultimate backfire against Satan and his plans forever. Somehow the church has missed a huge part of what the blood of Jesus paid for. The deeply entrenched belief system around these lies has worked against the building of faith.

Ramifications of Agreement with the Lies

The oppressive tentacles of these lies entangle many in our society. Satan’s agenda produces endless affliction, misery, pain on bodies and minds; then uses every means necessary including science, government control, religion, and fear to enslave people mentally, relationally and financially.

The ramification list is endless. Pharmaceutical companies push medications through for public use without long term trials or knowledge of the true effects. Our mineral-depleted land is producing crops soaked with chemicals known to be toxic to bodies.

Children are suffering the most and in greater numbers than in times past. Every children’s hospital in every city is full to capacity right now. Many are born into suffering, not even able to grow into the age of understanding where they can make their own choices for the truth. They represent millions of exhausted parents who are doing their best while battling helplessness and hopelessness.

In the last 8 years I have visited Emergency Rooms over thirty times. They are a needed resource, with trained staff to treat trauma and injury — a blessing we have in this country. However, what I’ve observed is that most ER visitors suffer with overwhelming issues related to chronic illness, food allergies, medication side-effects, auto-immune diseases and substance abuse — conditions that have no resolution or alleviation in the current system. There is standardly nothing curative offered, the goal being simply to reduce symptoms and send a person away with a continuously limited quality of life.

Chronic illness over time causes severe weakening of bodies, minds and emotions. Some lose the will to persevere, even to the point of death, as the energy needed to rise up and choose hope is to them nearly impossible. This statement may sound radical, but there could be a different outcome for many if the heavy oppression did not steal away the ability to fight. People are indeed perishing because of lack of knowledge. (Hosea 4:6)

Many free-thinking professionals who introduce a health alternative or research that verifies new cures for diseases are often vilified and silenced. Alternative health approaches are not paid for by health insurance. If a new method of treatment based on the science of how God created the human body arises, it is often hijacked by one of the systems of false religion or eastern mysticism, causing people to fear and reject the method. The unavailability of funds and the apprehension of doing something that defies the traditional medical approach cause many sick people to turn away from what could truly help them.

Even hospital environments have set aside our Creator, embracing all other false religions, under the pretense of appearing peaceable. While they provide chaplain services, I have seen more secular psychology offered by them than anything that resembles truth from the word of God, the only real comfort. Hospital gatherings offered to patients and families are scrubbed of any reference to Jesus, therefore devoid of the truth.

A couple years ago I was praying alone in the chapel of a children’s hospital where Carson was a patient. A distraught couple came in with a hospital chaplain. Their daughter with special needs had come into some sort of sudden trauma and was taken into the ER area; I gathered by the conversation that her prognosis was grim. They sobbed to this woman chaplain as my heart broke for them. They spoke about their shock, their guilt that they had not recognized something to be wrong sooner. I felt their pain deeply as I had battled with my own guilt in the past. 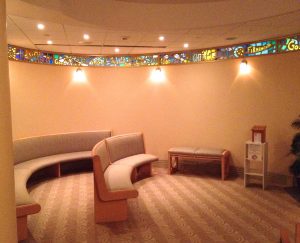 As their emotion intensified it became awkward for me to stay — the chapel is small and I felt like an intrusion. What upset me the most was that the chaplain offered nothing of substance, just a few cliche words. Finally, I could stand it no longer. I interrupted them and asked if I could pray with them. The precious couple clung to me as I sobbed with them, praying for an abrupt turnaround for their daughter, for them to not be buried by guilt and for strength to come. The chaplain just stared blankly. I don’t know what happened to that family, but I could not let the moment go without bringing them to the only One with the power to change things.

I could go on, but you get the idea. Many of you have endured a similar endless cycle of frustration in pursuit of answers for your own health.

The amazing news is that God has a plan. He doesn’t want it to stay this way — not the suffering of people nor the continuation of the evil behind the system that is currently in place.

In Part 5, we finally get into the good part.

For He has not ignored or belittled the suffering of the needy. He has not turned His back on them, but has listened to their cries for help. (Psalm 22:24)