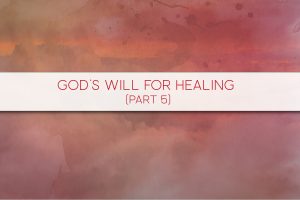 By now reading this series you likely feel a pessimism, considering the immense issues surrounding sickness and suffering. The inclination is to give up, talk about how bad things are and assume nothing will ever change.

God has a plan that exceeds our imagination to dismantle what has been in place and establish new paradigms regarding health and wholeness. He intends not only to bring His miraculous healing power once again to difficult situations, but also to bring His presence into the field of medicine so that new research and cures for diseases can come forth.

How will this come to be?

How did it get so bad in the first place?

What has restricted God from doing miracles?

Answer: The same thing that restricted Him in the Bible. UNBELIEF. Jesus performed thousands of miracles… everywhere except Nazareth.

[In Nazareth] They were deeply offended and refused to believe in him. And because of their unbelief, he couldn’t do any miracles among them except to place his hands on a few sick people and heal them. He was amazed at their unbelief. (Mark 6:3-6)

And they were deeply offended and refused to believe in Him. And so he did only a few miracles there because of their unbelief. (Matt. 13:57-58)

For hundreds of years, our culture and more specifically the church has fallen into a sad downward spiral:

No faith, accepting disease, no belief in healing or the goodness of God ——-> not seeing healing miracles ——-> deepening unbelief ———> more not seeing miracles happen ———> deepening unbelief, ultimately leading to hopelessness ———> downward spiral of more faithlessness. This is the dark place where most people live now. Miracles are not seen, so there is no belief for them. Since there is no belief, miracles are not seen.

The level of heavy spiritual oppression in place almost guarantees that a person cannot overcome it. I get it. To choose to believe is to take a stand against the fear of disappointment, which is no small feat. Many cannot bring themselves to a level of hope that life can improve when they are so beaten down in body and mind.

God has always wanted to bless people and do miracles for them. He hasn’t changed His desires since Jesus walked the earth. Jesus is the same yesterday, today and forever. But somehow over years people went from attributing miracles to God, to commonly now attributing disease to God. How did we get so far from the truth?

If you believe it is God’s desire to inflict pain and suffering, you will not be able to believe that God wants to heal. If you cannot bring yourself to believe that God can heal, it is not probable that you will see healing… just like the people of Nazareth. It was their doubt that disqualified them from experiencing miracles.

It was never going to change unless people decided to rise up and choose to believe. God has been waiting for us to believe His promises and hold on to them with a death grip. If we take His invitation, the cycle of unbelief and blaming the wrong source will end, and we will finally begin to push back the powers of darkness and throw off the heavy blanket of deception that has rested on us for decades.

This is what the Lord is doing with those of us who are making that choice. He is awakening us to what is really going on in the spirit realm and teaching us how to fight. To some of us He has even given a gift of faith, as our high faith level is not able to be reasoned out in a natural sense. (See 1 Corinthians 12:9) He will do this because He is gracious and sees the level of fight that is required to overcome what we see in front of us.

In a physical sense we fight with bodily support and treatment. In an emotional sense we fight with love and constant infusions of hope. This is why for years I brought my son every legitimate miracle story I could find. Every testimony of God’s supernatural work speaks of his power to do again what he has done before.

In the spirit realm though, the fight is won by only one thing — FAITH.

For change to happen, we must remember who God really is, know His nature and BEGIN AGAIN TO BELIEVE His word. When belief rises to that otherworldly level, it will break the atmospheric covering over the United States of general unbelief, so the cycle changes:

Soon there will be a breaking point — we affectionately call it the DOMINO EFFECT — where belief elevates to the point that we see the reversing of the downward spiral of unbelief and in its place, the establishment of an upward spiral of miracles coming forth again. The dominos (or the health “impossibilities”) will fall because NOTHING WILL BE IMPOSSIBLE to believe for.

This is amazing enough, but there is more as we will see in part 6.

I also pray that you will understand the incredible greatness of God’s power for us who believe him. This is the same mighty power that raised Jesus from the dead. (Ephesians 1:19)

The gloat never ends well for those bent against t

@itslaceylove gave me this. “You and chocolate a

This error message is only visible to WordPress admins

Error: There is no connected account for the user 14605497.
Send this to a friend