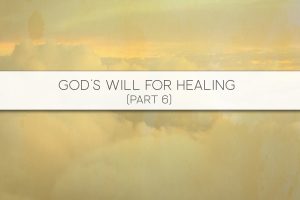 As I sat in the hospital with my son recently, the Lord reiterated to me that He really wants much more for us than we can imagine. In this new paradigm shift, not only will our faith and hope be renewed as we see God do unexplainable healings of bodies, minds and emotions, but people will see God and His love in a new way.

We’ve discussed the lies to disagree with, next we discuss the truth God is inviting us to agree with. These are big picture belief systems that will drive our thoughts on health moving forward. The choice to believe is ours, of course.

All those who were sick with various diseases came to him, and he laid his hands on every one of them and healed them. (Luke 4:40)

Jesus traveled throughout the region of Galilee, teaching in the synagogues and announcing the Good News about the Kingdom. And he healed every kind of disease and illness…. people soon began bringing to him all who were sick. And whatever their sickness or disease, or if they were demon possessed or epileptic or paralyzed—He healed them all. (Matthew 4:23-24)

Jesus returned to the Sea of Galilee and climbed a hill and sat down. A vast crowd brought people to him who were lame, blind, crippled, those who couldn’t speak, and many others. They laid them before Jesus, and he healed them all. (Matthew 15:29)

As He walked the earth, His actions were the picture of the Father’s will for man. It didn’t matter how bad someone’s condition appeared; in certain cases it didn’t even matter if the person was dead. He didn’t operate by what He saw, He knew His Father’s will and trusted His voice. What we see with our human eyes should not carry any weight compared to what He says. Things will begin to change when we fully grasp this. We walk by faith, not sight. Nothing has ever changed about God’s desires for people to be healed and whole.

2.  It is His will that we change the way we view aging. It was never His plan that we would be sapped of strength and stamina, eking out an existence and enduring a terrible quality of life until we die. God’s original intent for man was that we live long lives in strength. After the law was given, the normal lifespan was shortened because man could not keep the law and chose not to rely on God for health.

For Moses though, who knew God in deep relationship, it was different:

When the Lord told Moses it was time, he climbed a mountain and died. I don’t know about you, but that sounds better than suffering in bondage for years, leading up to the body finally failing. We have an even greater advantage because we live in the time period after Jesus gave his life on the cross, fulfilling the law.

What will this look like? I have no idea, but I know He wants to restore longevity and vitality to His children. He wants the paradigm of “inevitable process and breakdown of the body with aging” to be changed. He wants this common thinking to flip upside down and turn into faith believing:

(I hope it includes a restoring of youthful appearance, but He did not reveal that to be part of the package.😆)

3. It is His will to heal our physical land.

Two years ago God told me He had a plan to heal the land in our country that has been depleted of important minerals. My response was, “Woah, Lord, is that even possible?” (That is a dumb response to the God of the universe, by the way.) I know of two individuals receiving information from the Holy Spirit on how to bring about this land restoration process.

Our Father thinks of everything! He not only wants to heal us in every way, but He intends to provide ways for us to maintain the health that He restores. Crop yields grown on remineralized land will be more nourishing to our bodies in the future.

4. It is His will that once again healing miracles occur along with the message of His word. Every time Jesus sent out disciples or gave a directive, healing the sick was associated with teaching/preaching:

One day, Jesus called together his twelve disciples…he sent them out to tell everyone about the Kingdom of God and to heal the sick. (Luke 9:1-2)

And now, Oh Lord, give us, your servants, great boldness in preaching your word. Stretch out your hand with healing power; may miraculous signs and wonders be done through the name of Jesus. (Acts 4:29-30)

And God confirmed the message by giving signs and wonders and various miracles and gifts of the Holy Spirit whenever he chose. (Hebrews 2:4)

Soon we will begin to see this happen again, and the miracles will cause as much of a ruckus as they did when Jesus was here on earth. Why?

We have an exciting future. The agenda of the enemy against us has been overwhelming, crushing many. The Lord is inviting us into a new way of thinking, a push forward out of choices that have contributed to enslavement and into choices that will contribute to health, freedom and vitality. It comes down to our ability to enter into relationship with Him and believe…. which is simple in concept, hard in practice but worth the battle it takes.

For I, the Lord, love justice.

I hate robbery and wrongdoing.

I will faithfully reward my people for their suffering

and make an everlasting covenant with them.

Their descendants will be recognized

and honored among the nations.

Everyone will realize that they are a people

The gloat never ends well for those bent against t

@itslaceylove gave me this. “You and chocolate a

This error message is only visible to WordPress admins

Error: There is no connected account for the user 14605497.
Send this to a friend