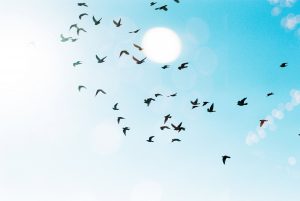 Anybody ever go through emotionally painful situations?

We all do, some of us live through more tragic events than others, but none of us are exempt.

Because of our family pain over the last six years, I have had to figure out how to process pain in the middle of continuous trauma. In His mercy, God has given me some strategies, even though at the time I didn’t know He was doing that.

When all is well in life, there is no opportunity to choose hope, no reason for forging a deep faith, no wrestling with hard questions. It is not hard to trust God when there is no pain. When trauma comes, it forces us to address our deepest beliefs. It launches us into intense personal grappling that can last for a long time. This happens under the surface, below things that are talked about in normal conversation. It produces more questions than ever get answered and turmoil deep in the soul that continually churns.

God does not mind our inner battle; He is okay with all of our questions. He welcomes them and is excited about our wrestlings. How can we ever come out on the side of truth without addressing the deepest questions of our hearts? It is the fight of your life to continually believe what you cannot see all while being tormented by what is happening in the natural world that you can see. Many people cannot face the fight, and turn to anything that will distract them or dull the pain. Why is it so hard? I believe it is mostly one reason:

In our core, we don’t believe that God is truly good.

The enemy works very hard to attack this core value, the goodness of God. To disbelieve His goodness is to distrust Him. Distrust causes us to question everything and never be able to fully embrace Him.

However, if we learn to discern and throw out the lies, coming to a sure place that God is good, we see everything that happens through a lens of His love. We will know He is working on our behalf. We can choose hope for the future even if my present is not lining up with the way I think it should. It’s not an intellectual  decision based on only words from the Bible; it is a decision based on the intimate relationship we have with Jesus.

True hope is only found in believing the truth about who God is and how He sees us (His children, the object of His love, His friends, His heirs). Hope is the thing that carries us from disappointment back to expectation again. Expectation is what takes us into faith. Faith becomes strong when we make this choice over and over again.

Choosing hope is risky. What if it doesn’t work out the way I hope it will? We all have, at some level, a self-defense mechanism for our own protection from further hurt, which is fear. Eventually I chose hope, facing down the risk.

Emotional pain and hope can co-exist. It’s being honest about the awful reality of a situation while also confessing the promises of God. David did this often in the Psalms.

Honestly, I’ve failed many days. Most mornings I would have given anything not to wake up and was sure I couldn’t face any more days without answers for my son. As soon as I would wake up, dread would choke me. One night I blurted out to God, “Do you even see how hard it is just to wake up in the morning? Are you even here when I wake up?” I put my head on the pillow and fell immediately asleep, hurting.

The next morning as my eyes fluttered open, I heard a phrase. I grabbed the Bible on my nightstand and found it, Psalm 139:17-18.

How precious are your thoughts about me, O God. They cannot be numbered! I can’t even count them; they outnumber the grains of sand! And when I wake up, you are still with me!

I was comforted. He was with me. I was not alone.

Sometimes processing through pain looks like one thing for one person and something very different for another.

During the summer when Carson was 16, one day we were coming home from a long hard day of appointments at the hospital. He hadn’t been able to eat any of the real food he wanted to eat in years. In our house, food has become Enemy #1. No matter what I prepare for him, even in the midst of reading every label and food policing, we cannot not get enough calories in him. He suffers from constant malnutrition, even in America with plentiful food and medical care. How it hurts to not be able to ever adequately nourish my son, the most fundamental duty of motherhood.

On this particular day, we were almost home when Carson said, “Mom, let’s go see Applebees.”

“You want to go see it? Why?” I asked. Applebees represented the utopia of his dreams. He was constantly wishing he could just go to Applebees and eat something. It became a plan that someday Applebees would be the place he would go when he was healed. His grandma has been saving all her loose change for years and will someday cash in the piles of change for an Applebees gift card for him. It is planned.

“I think we should just go there and pray.” He said.

And that’s what we did. We pulled into the Applebees parking lot. We looked at it and prayed for about ten minutes that God would allow us to go there someday. We declared into the atmosphere that Carson would eat there, that he would be able to order whatever we wanted. He dreamed about what it would be like to walk in and just simply eat. 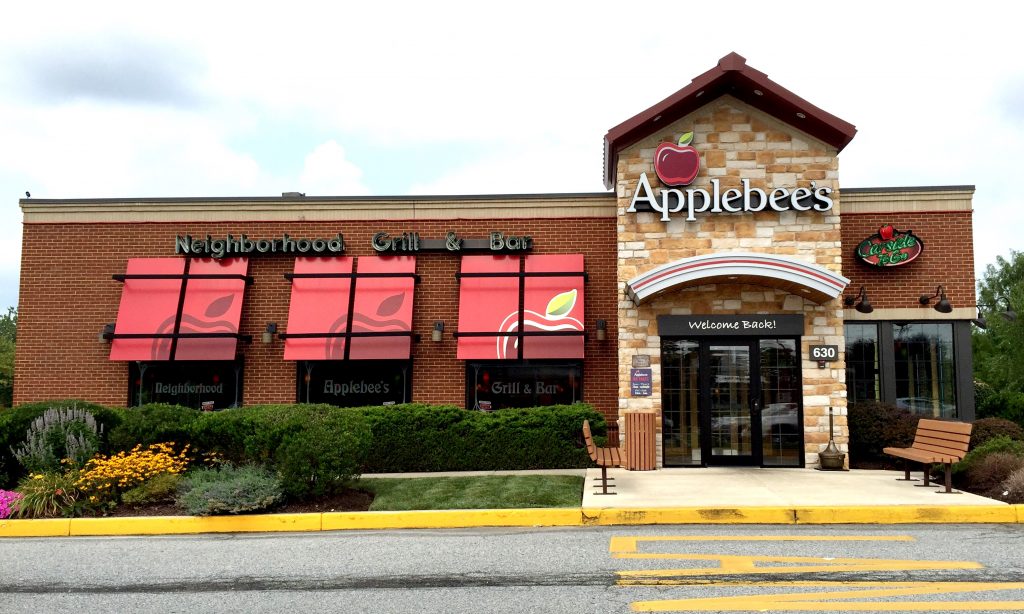 When we were done, we drove away in anguish. We had prayed. We had felt the hurt. We were hopeful. That day, that was how he processed pain and chose to move forward in hope.

When my mom wants to encourage Carson, she sends him a text picture of her growing group of solo cups full of loose change that are designated for Carson’s Applebees Gift Card Fund. In that way she helps him stay expectant in hope. It’s been 18 months and we still haven’t been able to take Carson to Applebees, but the pile of loose change is still growing. 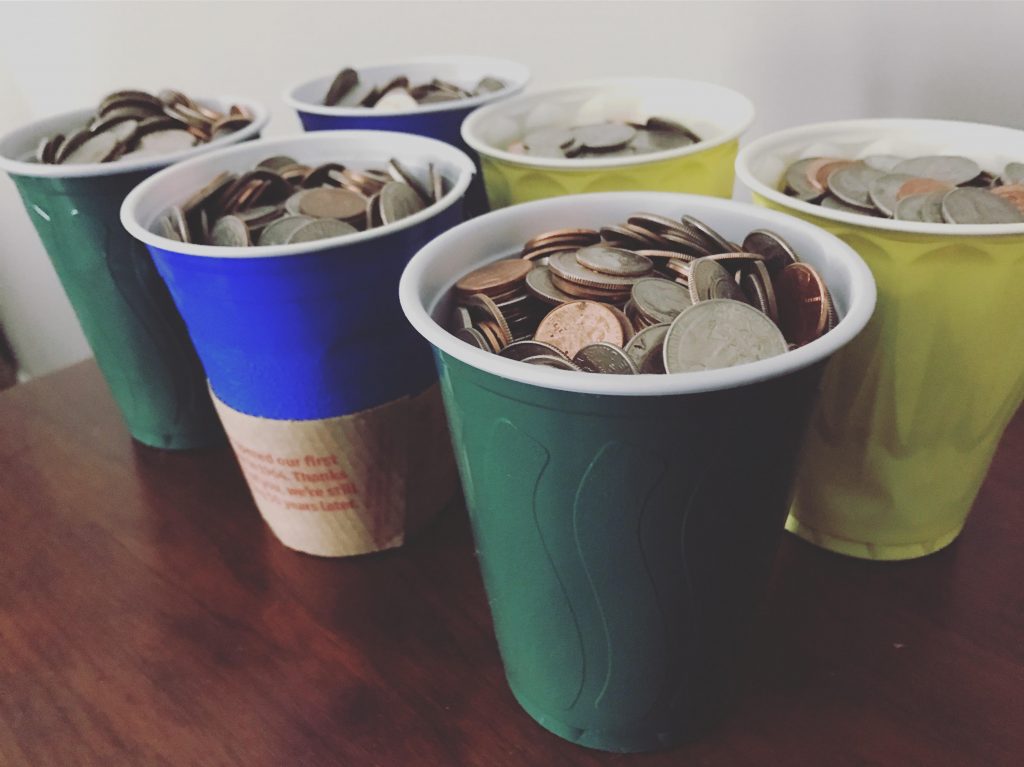 We have done these sorts of things over and over. When other family members are out eating something we know Carson likes, we make declarations over our own food for him, something like “Carson will eat pizza again with us in the name of Jesus.” People probably think we are crazy and that’s okay. It has served a purpose of solidifying our faith in the goodness of God, even if we haven’t seen our situation physically change. Sometimes we feel a little camaraderie with Abraham (Romans 4:17-21):

Abraham believed in the God who brings the dead back to life and who creates new things out of nothing. Even when there was no reason for hope, Abraham kept hoping…he never wavered in believing God’s promise. In fact, his faith grew stronger, and in this he brought glory to God.

He was fully convinced that God is able to do whatever He promises.

It’s been seven years since that day we prayed at Applebees. Today was the day we prayed for… Carson walked in and ordered what he wanted, which was a Whiskey bacon burger, fries and a side of boneless wings with spicy asian chili sauce.

Six weeks ago, the Lord abruptly healed him and released him from all food restrictions.

My mother saved her change until she collected over $600. She gave it to him a couple years ago, but he saved it until now.