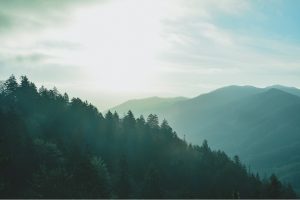 Everything in our physical world works against faith. Most people live in the mindset: SEE then BELIEVE.

God, however, is always in the process of taking us into deeper faith. His goal for us is that we would BELIEVE then SEE.

For we live by believing, and not by seeing. (2 Corinthians 5:7)

Then Jesus told him, “You believe because you have seen Me. Blessed are those who believe without seeing Me.” (John 20:29)

So what is faith, really? When I was young I remember hearing phrases thrown around. “You need more faith” or “build your faith.” Like faith was something you had to go find somewhere. If you couldn’t GET enough, you probably weren’t going very far in life, and FOR SURE you were not going to please God. That leads to useless attempts to make ourselves intellectually strive to believe more. And we worry that things will have the power to overtake us because we haven’t mastered this.

Eventually we just give up, but always there is an underlying feeling of not measuring up. Faith must be just one of those things that SOME OTHER people have somehow.

Have you ever noticed that when God gives you a promise, immediately EVERYTHING in life heads in the opposite direction of the promise? You might have thought it was only you, but no. It’s all of us, my friends. It is by His design. Here are two quick examples from the Bible:

Joseph – God gave him dreams of being a leader over his own family and more. Immediately he was sold into slavery and endured 14 years of forced service and imprisonment until it was time for him to emerge onto the scene and save entire nations from destruction.

Moses – God told him that He would lead a million people out of slavery from the oppression of Egypt. Through a series of crazy events, he did this only to come to a dead end in front of the Red Sea with no way of escape. The story is fascinating. In Exodus 4, God told Moses that the “full weight of the Egyptian army will chase after you. Don’t worry, I HAVE PLANNED THIS in order to display my glory and power.” {paraphrase is mine} God did, of course have a very cool plan to save them… after the people had a collective massive meltdown.

At first this faith thing is SCARY.

This is NOT COMFORTABLE.

If we are going to ever accomplish anything in life worthwhile, it will take faith. Unfortunately, faith is only built when we have a reason not to believe. I mean, if everything goes according to plan, then we don’t need faith at all.

Faith is only tested and built during a process when that thing that God told you would happen HASN’T EVEN REMOTELY started to happen yet. In fact, most of the time, as in the above examples it will actually look like life is going more downhill than up.

It’s in that place of complete weakness that we have a choice to make. And then we make the same choice the next day. And the next. It is in the downhill movement that we are actually building faith.

I have a friend who writes books under the name of Praying Medic. He has an amazing story. One day a few years ago when he was just a guy working as a paramedic, God spoke to him in a dream and told him that He was going to use him to heal some of his patients that he was transporting. The dream surprised him, and he started to take risks and pray for people in his ambulance.

At that point he could have given up. I mean, if God really wanted to heal people through him then the Lord wasn’t upholding His end of the deal, so it seemed. But he didn’t.

Instead he pursued a relationship with God more and struggled through a process of coming to believe strongly before he ever saw what was promised to him come true. Today, just a few years later, he constantly sees people healed of certain conditions every time he prays for them, and God continues to build his faith for more.

I hear stories where this same scenario is repeated all the time. God gives a promise, the person takes steps in that direction, their whole world goes crazy and the opposite of the promise seems to be true.

I was asking God about this recently after hearing stories like this. I was a little worried and having a weak moment. Lord, will I have to go through this too? I was feeling exhausted physically and mentally after all the years of my son’s illness. I didn’t think I had the stamina that it seemed to take to develop that kind of faith.

His immediate reply gave me great relief. He said, “No, Bryn, you have already gone through this process. Yours looks different than others. Each person who decides to believe in My promises has their own faith journey. You have prayed for your son, believing in what I have promised. You have chosen to believe through your tears that I will do what I have said. You’ve already won this battle.”

I have an expectation that my personal victory for my son’s health will be seen.

Faith does not come from logic and intellect. We cannot WILL ourselves to have faith, it just doesn’t work that way. Take a deep breath and exhale that sigh of relief.

It’s been my experience that faith comes from knowing who God is. That He is FOR us, that He is GOOD. If we don’t have faith it’s because some part of us is unsure about Him. How can we trust someone or something we don’t know? This question will usually bring about more questions. Don’t worry, Jesus loves our questions and helping us wrestle through the process.

So if you don’t have faith, the first step is to simply ask Him – why don’t I trust You? What lies am I believing about You that keep me from knowing Your true nature? He will reveal to you what you need to know. Your part is to agree and decide to replace the lies with the truth.

When we come to know the truth in the HEART, not only the mind, faith is a natural byproduct. We no longer have to work at it.  It happens naturally.

Many of the lies we believe about God come from deep pain. That is something we will be talking about next.

It is possible to arrive and live in the place with God where our faith is solid, no longer shakeable. It’s not a small thing to walk this road, choosing to believe God when it seems like nothing is happening the way He said it would.

All I can tell you is that the journey is worth it.

Send this to a friend