I had a weird 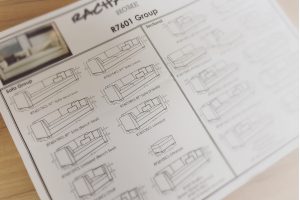 compulsion to buy new furniture and I didn’t know why.

We have three college-age kids, not enough cars for all the drivers in the house, and have been chipping away at a mound of medical debt. New furniture was not on any list of priorities. No dedicated Dave Ramsey follower would ever approve of this foolishness.

It started two months ago when one day my husband said, “Hey lets go out and look at a few furniture stores.” That alone was bizarre. I’ve been married to this man for nearly 24 years and he had never spoken such words out of his mouth.

I didn’t want to go. Our geographical area is fraught with ugly furniture. (No offense meant to anyone.) All day while we were out I texted pictures of hideous furniture to my kids to prove my point.

After strolling through a few awful furniture stores, we found one single sofa set that was reasonable and comfortable. It wasn’t the ultra-modern look that I wanted, but at least it had clean lines and was well-constructed. We brought home a swatch of fabric and the business card of a furniture salesman named John (not his real name).

The fabric sample floated around our dining room table for about six weeks. We intended to go back to the store, but life and situations happened that prevented us from making a decision about it.

Still every day I would see the fabric swatch and think why do I feel like we should do this? Adding to that, my husband and I had been having deep discussions about how we make decisions differently than we used to: for us, every decision is spiritual. We would chat off and on about it, and I would say, “It’s strange but I think we are supposed to buy furniture.”

We talked through all the obvious reasons why we didn’t need to buy furniture. I wasn’t emotionally attached to it. Still, the compulsion was there and we couldn’t shake it.

Today we finally went back to the furniture store and found John, the salesman who helped us before. Knowing he is paid on commission, we wanted him to have credit for the sale, since he had been patient with our two-month decision making process.

We sat in an open area with tables and chairs surrounded by a wall of fabric samples. He carefully wrote up our order, which took longer than usual because no one had ever ordered this particular sofa group before. (Classic me, picking the furniture nobody else wants.)

Then an amazing thing happened. As John was chatting with us about our order, he stopped and said, “I lost my wife recently, and it’s been rough. She was everything, my best friend.”

Time stopped. Suddenly we went from talking about something that doesn’t really matter (furniture) to talking about the earth shattering pain engulfing this 58-year-old man. It was like we could see deep into his soul.

As he talked I felt his pain, his guilt, his hopelessness. One year ago he went to sleep with Debbie next to him in bed at 11pm. At 6:30am he woke up to find her completely freezing cold, dead. At the young age of 48 his Debbie had suffered a heart attack in her sleep without warning or symptoms.

He spoke of his regrets, his guilt, his lack of will to live. He wished he had told her every day that he loved her. He wondered if it was his fault that he missed warning signs of her impending health problem. As he spoke, I felt God’s love welling up inside me for this man.

He stood up to grab a pen. Jeff shot me a glance and we knew we needed to pray with him.

When he sat back down, Jeff told him a little bit of our story, and spoke about our faith in God. When we asked if we could pray with him, he didn’t hesitate. Debbie had deeply believed in God, but he had not.

I asked John if it was okay for me to put my hand on his arm and I prayed. He and I both cried the whole time, totally forgetting we were in the middle of a large furniture store. I broke off the hopelessness, prayed that God would pierce through his darkness and give him the will to live, that he would find peace and be able to let go of the heavy weight of guilt. Through snot and tears we told him that God’s plans were not for harm, and that He hurt with John over Debbie’s death.

When we were done, we knew that this was never about new furniture. God had sent us here to reach out to a sweet man who was drowning in darkness and hopelessness. I wonder if Debbie herself might have asked Jesus to send someone to go buy furniture so that John could be pulled out of his despair. It was no coincidence that we were there.

He looked at us and genuinely asked, “Do you both really think I will see her again?”

“YES.” Jeff and I answered emphatically in unison without hesitation. Sheer relief washed over his face. He was so broken-hearted, but so open, we know that our involvement in his life does not end today. It will be our great honor to help him get to know our God for himself. He didn’t want us to leave the store. We both hugged this furniture salesman-turned friend as we left.

Friends, there are people like this everywhere. Can we trust God enough to take a step and do something that seems illogical? Overthinking and logic will always derail what the Holy Spirit directs us to do. His thoughts are not the same as ours.

Today we got to bring hope to a completely hopeless person. There is no better use of time or money.

The new furniture is just an unimportant, added bonus.

Always be prepared to give an answer to everyone who asks you to give the reason for the hope that you have…(1 Peter 3:15)

Couldn’t live this more!! I love to see how God used the ordinary to do extraordinary things!

Praying for you and your family often!

Thank you Vicki, and me too.

And of course my phone auto corrected love to live. Sorry!! ❤️

That is beautiful Bryn& what a blessing to that dear man. Prayers with him as he grows in his relationship to our Lird & Savior!????

God spoke to me today through this. May I share it please?

This is awesome. I couldn’t agree more. Yay God!

What a sweet story! I love your willingness to pray with this hurting man and point him to Christ. And from your chapter of suffering in life right now, there is no doubt that you were hand-picked for the job of comforting the broken-hearted.

Thanks for sharing and always being His instrument. Praying for you and this man.

Well done Bryn. Hearing Gods call and being willing to step out in faith are priceless gifts.

I love this! Wonderful God moment only he could orchestrate so beautifully. Praying for this man and all of you.

Typing with tears in my eyes. So thankful you listened to God’s whisper to go back there. My husband, Rob, and I can relate to the “every decision is spiritual” situation.
Thank you for being sensitive to the leading of the Holy Spirit and thank you for being malleable in the hands of the Lord. Your writing always blesses me and the way you walk this path is bringing glory to your Father in heaven. Praying for “John”.

You've popped up in my mind recently and I've been thanking God for you, asking him to bless, protect and guide you and your family. Love hearing about your daily walk with Holy Spirit!