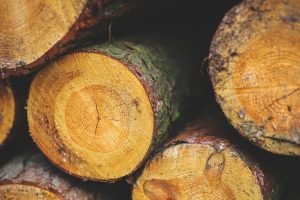 As parents, we often take the brunt of trauma for our children. We handle the worst part of a negative situation while we shield them from feeling the effects. It’s our nature to do that.

For example, one Christmas when our kids were pre-school age, our financial situation was tight. We had only a tiny bit of money to spend on Christmas gifts. Fortunately, our kids were easily entertained at that age. That year I forget what we gave our twin boys, but I remember distinctly the amazing deal we stumbled upon for Lacey… a clearance sale on little girl pink blow-up furniture with a Barbie motif for $9.99.

Instead of leaving it in the box, we spent all night Christmas Eve setting up the blow up furniture living room. When our daughter came downstairs on Christmas morning, she thought she won the lottery and we were the best parents in the universe. Even now as a young adult, she remembers that one Christmas and her pink Barbie blow-up furniture.

She had no idea we were scraping by financially. She didn’t know we were concerned about paying our bills. That was the way we wanted it. She didn’t need to know.

Six years ago, when our twelve year-old son became violently sick, I desperately wanted to take it for him. I would have given my life for him to have his back. God, in His mercy protected me from my own prayers. I know a lot more now about the kind of authority we can give our true enemy with our words; he is an enemy that doesn’t play fair.

Still I did everything I could possibly do to take as much of the brunt as I could. During the first months we spent in hospitals with terrifying diagnosis’ being given to him, I handled much for him that he didn’t know about… decisions about tests, hearing test results, discussions about medications and working with hospital equipment.

Carson was too weak to stand. To bathe him, Jeff and I had to work together to cradle his body in the bath tub. Weighing only 70 pounds, our hearts were pierced with grief just looking at him. It reminded us of the heart wrenching pictures of Holocaust concentration camp victims during World War II.

Early during that first hospital stay, I noticed that each day when the team of doctors would walk in, Carson would retreat into a shell. He suddenly stopped talking and would become very anxious. This was not typical of his personality. Every day they would deliver more bad news, push on his painful stomach and ask him a bunch of questions. He hated being the center of discussion while an intimidating team of doctors surrounded his bed and stared down at him. I watched this happen a few times before I caught on. I started to go over to his bed and sit down with him every time I would see them coming.

I could see a flicker of relief in him and he needed me to protect him and speak for him. I started answering questions for him so that he wouldn’t have to. The doctors probably wondered why I would answer questions for my teenage son, but I did not care. Carson had been suffering silently and needed my help. I now understand a lot more about the spiritual atmosphere and the intimidation of the spiritual warfare that surrounded him.

About a year ago we were dealt another blow. I had to take Carson for a bone scan during one of our scheduled hospital appointment visits. The scan itself was easy and painless. All Carson had to do was lay still on a special platform for a few minutes.

I stood watching as his bones came into view on the computer monitor that the technician was using. Oh no, I thought. This does not look good. I don’t know very much about bone scans, but I knew what bones were supposed to look like – bright white, opaque and solid – not the dull, spongy images I was staring at on the screen. His bone scan score was whispered quietly to me by the technician.

My seventeen year old son had the equivalent bone strength of a frail, 95 year old woman.

I came home feeling numb. As I sat on my bed that day and picked up my Bible, I started reading right where I had left off the day before, and was amazed to see what it said: 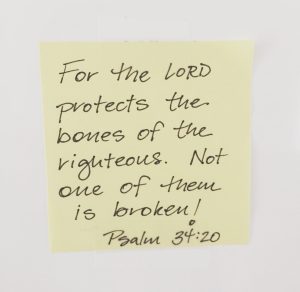 For the Lord protects the bones of the righteous. Not one of them is broken.   (Psalm 34:20)

God told me that day that although I didn’t know about his bones being so weak, He did and was already working on the case as promised in this verse. Carson’s bones had been and still were His responsibility. For the next several years, this sticky-note was a fixture in our kitchen.

He had been taking the brunt for us all along, protecting Carson’s bones. The only difference that day was that I learned that He was.

The most Epic Brunt of all was taken by God Himself for us. Jesus was tortured and put to death on the cross WILLINGLY so that we could be whole.

Because of the joy awaiting Him, He endured the cross, disregarding it’s shame. (Hebrews 12:2, NLT)

All for one reason: LOVE. He loves us. Every one of us.

Somehow, he looked at humanity and judged that we were worth it. We could spend all eternity studying this one powerful act that was the greatest sacrifice ever in the history of the cosmos. He delivered us from the penalty of every kind of oppression. He wants us to be free in every way in body, soul and spirit. Because of Him, we have:

Light instead of Darkness.

Love instead of Hate.

Freedom instead of bondage.

Creativity instead of hopelessness.

Unity instead of division.

Family instead of isolation.

Health instead of sickness.

Joy instead of depression.

Peace instead of violence.

Hope instead of despair.

Life instead of the nature of death.

So there He is, having taken the brunt for us EPICLY, and still handling stuff for us in our every day lives as we also bear the brunt of hard things for our children.

It’s what loving parents do.

Oh, Bryn… I was crying and praying as I read your words. I love the way you stand on the Word of God, relying on his promises, trusting him to keep his word. So proud of you and Carson! Give him a big hug from me. 🙂

Thank you so much Marion. Your story is one of the reasons I’ve been able to hope.