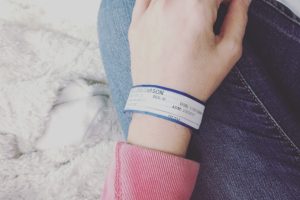 When your child is admitted to the hospital, the first thing the attending nurse does is put a hospital bracelet on your child and one on each parent. It serves many purposes involving medical care, but it also identifies your child with you.

My son’s bracelet has his name and patient ID on it, but MY bracelet also has HIS name and patient ID on it. He is mine. No one can leave the hospital with him except for me or my husband. The bracelet is indestructible. Some of our hospital stays have been months long, and the bracelet never dies, it has some kind of no-joke plastic bonding mechanism of staying power. We take these bracelets seriously. Nobody takes him anywhere without our approval. Medical treatments are discussed only with us. We love our son, and he is ours. The bracelet proves it. It stays on until we are able to take him home.

Think about this: God is wearing a bracelet with your name on it.

When you make a choice for Him, He secures an indestructible bracelet on his wrist with your name on it. (It’s a metaphor, you understand.) He loves you, he cares for you, and nothing gets by Him without His notice.

Some of us, through a rough childhood or absence of one or more parents, have a very hard time with the idea of being a son or daughter of God, or thinking of Him as a loving Father.

When the fledgling nation of Israel left Egypt and set out to find the land that God had promised them years before, they had the mentality of slaves and orphans. For a few hundred years, generations of them had been severely oppressed and treated poorly. The entire story of the way God delivered them from Egypt was the start of Him teaching them how to begin to think like beloved children instead of orphans. He performed outlandish miracles for them and enabled them to carry off the wealth of Egypt when they left. He delivered them in an epic final showdown as they walked unharmed through the Red Sea. When they needed clean water and food, He provided it miraculously.

He wanted to teach them that He was their Father, their Protector, their Healer. He was the One who blesses, the One who would never leave them, the One who loved them. But they didn’t trust Him. They kept reverting back to the fear that was ingrained in them during their years living as slaves.

I’ve read a couple of stories lately told by foster parents, describing the experiences of taking in children who hadn’t had a stable home environment. In each case, one of the first things they noticed was that the child that came into their home would eat ravenously, and hoard food when they thought nobody was looking. They didn’t have the assurance in life that they would be provided for, and feared not having what they needed. It took a long time for them to realize that their basic needs would be met. This happened to the nation of Israel too.

We are this way with God if we are honest.

My friends, great freedom and relief is found on the other side of realizing we are not orphans!

The truth is that we are loved for one reason… we exist. We are supposed to live in the context of family. We relate with Him knowing we are righteous (because He says we are) and accepted. We are known.

He is our Father, the ultimate Dad. It is His nature, none of it has to do with us or our performance. As we live in our identity of His son/daughter we live in privileges and inheritance, we don’t have to perform for it. We are worth being provided for because He decided we are. Nothing will change how He feels about us. We are part of the most stable of families, no matter what our earth family may look like. We have a Dad that is responsible for our safety, attentive to our needs! Not only that, but He has unlimited resources at His disposal, never operating out of lack. He has the answers for broken relationships, business success, health crisis and emotional pain. When we make mistakes, we come to Him in repentance and He says, “Hey, I forgive you, just try again. Remember who you are, (loved, accepted, worthy, my daughter) and remember I am with You.”

Can we decide to throw off fear and the need for self preservation, learning instead how to live from inheritance and rest? What would it look like if we really trusted Him as our Dad who is always there, always attentive, never condemning, desiring to watch us reach our full potential? Isn’t that what we want for our own children, for them to live loved and to live without limits?

It’s the opportunity of a lifetime to choose this kind of life, trusting Him, knowing He has our best interests in mind and realizing that we don’t have to figure everything out ourselves.

Until you go to be with Him, He’s wearing that bracelet with your name on it.
You are secure.
His.
Loved.
Known.

Some of us were used to being slaves to Satan. Great post!

Wow, so good. Lifted my spirits. Think and pray for all of you often.

Another Daughter of the Most High Reply

Really good. BTW, our favorite bracelet has become the “Fall Risk” one. Just something really entertaining about that for me. Also a metaphor? 🙂